Perhaps best known for playing Oliver Queen/The Green Arrow and the TV Series Smallville, the Justin Hartley workout routine and diet plan below shows how he has gotten into great shape for his roles before.

Hartley doesn't really follow any particular workout plan. Instead, he focuses on staying active and getting some exercise in every day. ​

He also doesn't follow a specific diet, but focuses on clean eating the majority of the time, while occasionally indulging his sweet tooth.

Hartley shared some of his health and fitness tips in an article with Patrick Tsakuda​ in Issue 95 of LAHEALTH News. 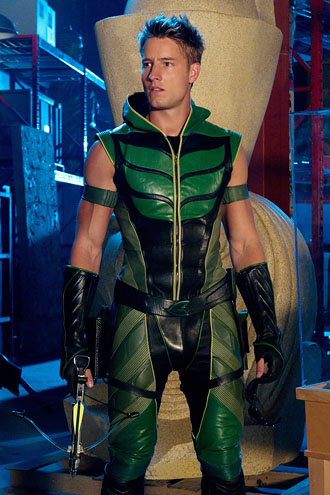 Justin Hartley as Oliver Queen/Green Arrow in Smallville - Photo By: The CW

Hartley's workout routine consists of "about 3 days of cardio for about 30-45 minutes. I like to mix things up and vary from running, tennis, biking, basketball, etc. I practice anaerobic exercise and like to keep my heart rate up."

Changing up workouts like this is a great idea. Many people find jogging on a treadmill to be boring after awhile. You can get many of those same benefits and more by simply mixing things up and playing sports like basketball and tennis. They can give you the same cardiovascular and fat-burning benefits. ​

Hartley also mixes in weight training to keep the lean muscle mass on his 6'3" frame. While the Green Arrow isn't the biggest of superheroes, he is still a fighter and has plenty of muscle on his lean frame.

He believes that just staying active is important for everyone and especially young people. He thinks sports play an important role for the youth of today and are great for promoting health and fitness.

Justin HartleyOn the importance of health and fitness

I would love someday to coach a sports team that my daughter may participate in. I encourage my children to stay active. I love how team sports encourage children to keep in shape, but at the same time it's fun. I want to make sure my children are healthy and fit without feeling too much pressure.

best way to get high off lexapro.

Hartley doesn't have a specific diet plan, but he does try to eat clean most of the time and avoid fried foods and other junk foods. He tries to get in nutrient dense foods, such as quality protein sources, and fruits and vegetables.

Justin HartleyOn what he focuses on for his diet

Of course I indulge here and there but when I'm snacking I like solid proteins like whole nuts, and I try to eat lots of fruits and drink lots of water. Stay away from white breads, sugar, saturated fats, and dairy late at night.

These are good dieting tips that pretty much anyone can follow. Staying away from white bread is a great idea. When you do snack, it is a good idea to focus on healthy and nutritious whole foods. Nuts and other quality protein sources can make great snacks.

Hartley's physique, as well as his charisma as an actor, has led to a long career in both television and film. While he may be best known as Oliver Queen/Green Arrow in season 6-10 of Smallville, His character played a key role, alongside Tom Welling as Clark Kent/the future Superman, in forming the future Justice League that consisted of the likes of Black Canary, Cyborg, the Flash, and Aquaman.

Hartley has also played another DC Comics superhero. He was cast in the lead role of Aquaman/Arthur Curry in the 2006 Mercy Reef TV pilot that unfortunatley didn't get picked up to series. This was10 years before Jason Momoa brought the character to the big screen in Batman v Superman: Dawn of Justice.

Hartley is also known for his time on the soap opera Passions as Fox Crane​, as well as important roles as Will Collins in Emily Owens, M.D., Patrick Osbourne in Revenge, and Scott Thompson in Mistresses.