The Mikan Drill for Basketball 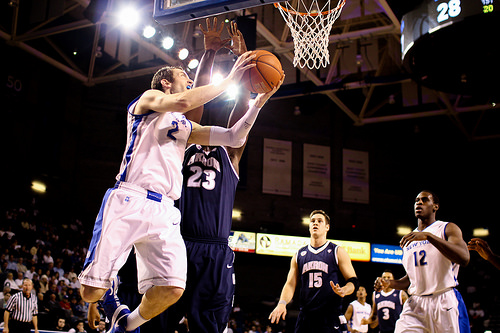 The Mikan drill has been one of the most popular basketball drills from coaches for several decades. The drill can help big men work on finishing with a soft touch around the hoop and being able to finish with both hands. It consists of repeated 1 hand layup attempts, while alternating hands and side of the basket to finish on. You can see video of a young athlete performing the drill in the footage below:

There are a few essential points to remember when coaching this drill. The athlete should be focus on proper technique, by keeping the basketball high and above their head, and rising up off of one foot. You can’t see it in the video, but the player is looking to bank in the layup on every attempt.

With this drill, players are able to get in dozens or hundreds of shots in just a few minutes. This leads to benefits in finishing touch, weak hand skill development, and even conditioning. This is an excellent drill for big men in off-season training or as part of their warm-up routine.

There are a couple options to make this drill competitive. You can either set a time limit and have athlete count their number of makes, hoping that they increase with each attempt, or give the player a goal number of makes, and time how long it takes. This is a great way to turn what could be a boring exercise into a fun and competitive game between teammates.

There are also other variations that can be done once your players have mastered the movement. You can see the reverse Mikan Drill in the video below. Rather than facing the backboard, the athlete will actually be facing the opposite direction and perform a series of reverse layups. This is a great twist to mix in whenever athletes are feeling a little too confident, but it also has benefits. Performing this drill in reverse will offer a lot of the same benefits, but it is a new stimulus that should increase skill development.

This video below demonstrates the 2 footed Mikan drill without using the backboard. It is almost exactly the same, except the athlete jumps off of both feet when attempting the layup and do not bank the shot it. They still finish with 1 hand. This also has benefits, although it is a slower drill if you are using it for time and can be very challenging for athletes who are used to using the backboard.

The Mikan Drill is named after none other than George Mikan, who was often seen performing the drill. The movement was made popular by Mikan and his coach while at Depaul, Ray Meyer. While they are hardly the only 2 to ever implement this drill, they are the pioneers of it and their success led to others copying in hopes of developing a similarly deadly hook shot. Despite being several decades old, it remains one of the most popular drills in all of basketball, and it is still very common to see power forwards and centers getting their reps in.

Mikan is one of the most dominant players in basketball history, earning the nickname “Mr. Basketball”, and many changes would be made to the NBA rule book in an effort to combat his dominance and make the game more fair. At 6’10” and 245 pounds, he was a rare talent while playing for the Minneapolis Lakers from 1947 to 1956. Mikan, who passed away in 2005, is in the Basketball Hall of Fame and was named as one of the NBA’s 50 Greatest Players of All-Time in 1996.

Add Your Reply
can you get a yeast infection from taking valtrex.