The bench press has long been a popular test of strength. The NFL uses the 225-pound repetition bench press test as a way to test upper-body strength for its incoming rookie class.

Below is a list of the NFL Combine Bench Press Record by position group. It is important to note that nfl.com doesn't have records of all scouting combine results. The NFL scouting combine, then known as the National Invitational Camp (NIC), first began in 1982. The NFL website only has records of results since 2006 and refers to them as recent bests as opposed to all-time combine records.

While the results and environment are exciting when they happen, it is important to note that the combine tests aren't always a great predictor of success at the professional level.  ​You'll see from the athletes below that combine success hardly guarantees success at the next level. This is largely due to the fact that this test has little specificity to what players actually do on the football field. 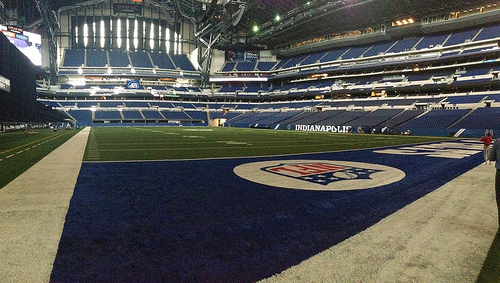 The recent best for all positions would be Stephen Paea's 49 reps from 2011. The all-time NFL combine bench press record is held by Justin Ernest. Ernest, a defensive tackle from Eastern Kentucky University, performed 51 repetitions in the bench press with 225 pounds at the 1999 combine.

It is pretty obvious from these results that the number of bench press repetitions performed has little impact on long-term NFL success. Few of the athletes with the best performance at their position went on to have lengthy career.

Chris Houston and Stephen Paea jump off the page as players from this list with successful careers. Houston has had 91 career starts and many good seasons as a cornerback. This is interesting in that his bench press ability is mostly coincidental to his career success. Of all the football positions, one could argue that bench press strength would be least important for cornerbacks.​

While strength is great, the bench press test is more of a test of speed endurance. This has little application to football. In football, you don't perform endurance tests at sub-maximal strength. Instead you perform maximal strength efforts for short bursts, such as 3-5 seconds, followed by rest and recovery before the next play.

Training for strength and power would be much more beneficial for football players.​ They need to be able to produce force rapidly, not slowly as in an endurance bench press test.

With today's technology, the NFL should seriously reconsider the bench press test at the combine. Would a one repetition maximum be a better predictor of success? There is also technology that can measure how fast the athlete can perform a repetition. This would be a much better predictor of upper-body power and athletic potential. ​