What is the Point Guard Position in Basketball? 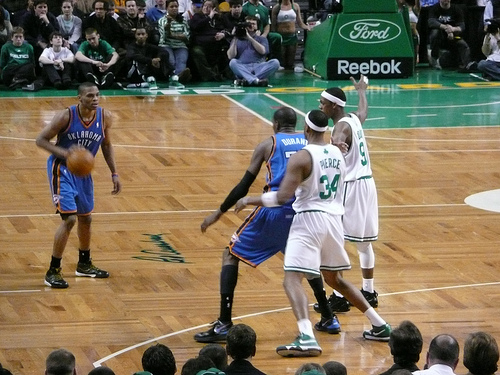 The point guard position is one of the more prominent in basketball because they have so many responsibilities and have the ball in their hand so much. Most people can pick out a point guard because they start the offense for their team.

This might be the most unique role that a point guard has. The point guard is the quarterback of a basketball team and is known as a floor general. They are responsible for bringing the ball up the court on offense and getting the team into the right play or set. Most point guards get the play call from their head coach, although they may have at least some play-calling ability.

Magic Johnson is one of the best NBA players ever at running an offense. He was the floor general for the 1980s “showtime” Los Angeles Lakers. Johnson averaged 19.5 points, 11.2 assists, and 7.2 rebounds per game for his career.

Ballhandling includes both dribbling and passing. They have the ball in their hand more than any other position. They dribble the ball up court and may have the ball in their hand for awhile as the play develops. Dribbling is also important when pushing the basketball up court on a fast break and in half-court situations, such as the pick-and-roll. It’s also important for them to take care of the basketball, and the goal is to have a good assist-to-turnover ratio.

Because they are handling the ball so much and are responsible for setting their teammates up, point guards usually lead their team in assists. John Stockton is one of the best all-time examples of this. Stockton played 19 seasons for the Utah Jazz from 1984-2003. He averaged 10.5 assists per game for his career and is the all-time leader in career assists with 15,806.

Chris Paul of the Los Angeles Clippers is one of the best ballhandlers and passers in the game today. In the 2007-2008 season, while with the New Orleans Hornets, Paul averaged 11.2 assists to only 2.5 turnovers per game. This shows his ability to take care of the basketball and set up his teammates.

At the NBA level, point guards have taken on more of a scoring role for their teams in recent years. If they are able to score and set up teammates, they can put extra stress on the defense because there are more options to defend. Good Complete scorers are able to score points off of the dribble as well as shoot from mid-range and from 3-point distance.

Isiah Thomas was one of the best scoring point guards of the 1980s. Thomas played for the Detroit Pistons from 1981 to 1994. He was tremendous scoring and setting up teammates off the dribble. He had five seasons averaging more than 20 points per game. Thomas only made 398 3 point shots in his career, but that was emphasized less when he was an active player.

Today, point guards are expected to be able to shoot well from distance along with attacking the basket. Stephen Curry of the Golden State Warriors is the best example in the league today. During Curry’s fantastic 2014-2015 MVP season, he averaged 23.8 points per game while shooting more than 44% from 3-point range. Curry is a complete threat who can shoot from anywhere on the court as well as attack the basket. His play helped the Warriors the 2015 NBA Championship.

This certainly isn’t their least important skill, and it is important for any position in basketball. Point guards usually have a tough matchup, because defending another point guard is a lot of work. They have to be tremendous on-ball defensively and stay in front of their matchup. They also have to fight around screens and be able to contest jump shots.

Stockton is also one of the best defenders in NBA history. Despite being listed at just 6’1″ and 175 pounds, he was a terrific on-ball defender and retired with a record 3,265 career steals.

Patrick Beverley of the Houston Rockets is a valuable player because of his defensive ability. While his career best is just 10.2 points per game, he has been a starter on playoff teams because of his defense. This despite being a 2nd round pick who didn’t have a lot of hype coming into the league.

The point guard position is crucial for a basketball team’s success. They are responsible for leading the offense, taking care of the basketball, scoring and defending. All of these skills are what makes for a complete player who can run the team on both the offensive and defensive ends of the court. A complete point guard is a dynamic threat who can be a handful for the opposition.