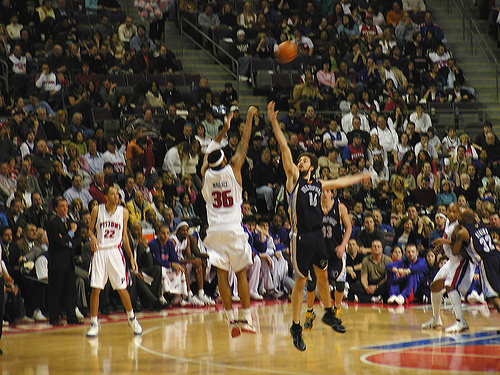 Rasheed Wallace is one of the more talented and outrageous players in the NBA in recent memory. He was none for being a versatile and skilled big man who was always there to say something great. These 7 Rasheed Wallace quotes below show how his personality translated to basketball thoughts.

Despite being one of the better big man in the league and capable of dominating on both offense and defense, Wallace was quit to accept blame whenever he did it. When the most talented players on your team accept blame, it creates a culture of unselfishness. He didn’t give himself a pass if he wasn’t playing to the best of his ability or wasn’t giving great effort. You can see below how he says it in his own special way.

Wallace liked being the underdog. Despite being on many successful teams, especially in his time with the Detroit Pistons, he craved being ruled out. He didn’t care if his team wasn’t getting the most media attention. They just went about handling their business and finding ways to win games whether anyone was talking about it or not.

Defense is crucial in basketball. He played on several teams that had dominant defense. Whether his team was making shots or not, they knew they could rely on their defense to keep them in even the toughest games. Your offensive performance should have zero effort on your defensive performance.

That doesn’t surprise us at all. We’re still the same Pistons and we still go out and play that same Pistons D. That wasn’t going to change.

Wallace was always ready to play when the pressure was on. He craved the big game environment. His key was to treat it like every other game. After all, it is still basketball. He treated every game the same, so it didn’t feel any different, regardless of what was on the line.

Despite his tremendous individual skills, Wallace preferred to put the team first. He could have been selfish, looked for his own shots, and tried to see how much he could score offensively. Instead, he tried to do what was best for the team and could lead to success. Despite his great gifts, he could be very unselfish on the basketball court. He cared more about the number of championships than the number of shot attempts he would get.

I’m not a big fan of individuality. My wife and kids will like it, but I’d rather have a championship.

Effort is important in every basketball game. In big games, it can be the difference between winning and losing. A 48 minute NBA basketball game often comes down to just 1 or 2 plays. It’s important to not take anything for granted and treat every play as it is the most important play of the game. Good effort can give you a chance to win almost any game.

We knew if we were going to win this game we were going to have to go out there and play hard and make those diving plays, those hustle plays. And that’s what we did to get back into the game and took it from there.

Wallace always kept his eye on the ultimate goal. It is important for the team not to get down on any 1 individual play or game. The important part is the big goal, in his case the championship. They did everything they could to reach that level.

Our ultimate goal is not to have the best record, but to win that championship.

Rasheed Wallace had a long and successful NBA career after being the 4th overall pick in the 1995 Draft out of North Carolina. Despite his tremendous talents, Wallace bounced around to several teams in his career. He would play for the Washington Bullets, Portland Trail Blazers, Atlanta Hawks, Detroit Pistons, Boston Celtics, and New York Knicks.

Wallace had his most team success with the Detroit Pistons. Traded to them in the middle of the 2004 season, the addition of Wallace would put the Pistons over the top. They would win the 2004 NBA Championship just months after adding him. He was the final piece to a dominant defense and his all-around offensive skills boosted the team as well.

Over a 16 season NBA career, Wallace averaged 14.4 points and 6.7 rebounds over the course of 1,109 games. His versatility and unique personality made him a favorite of fans during his career. These awesome Rasheed Wallace quotes give an interesting insight in to his unique perspective and basketball knowledge.

Add Your Reply
does benadryl get rid of cold sores.