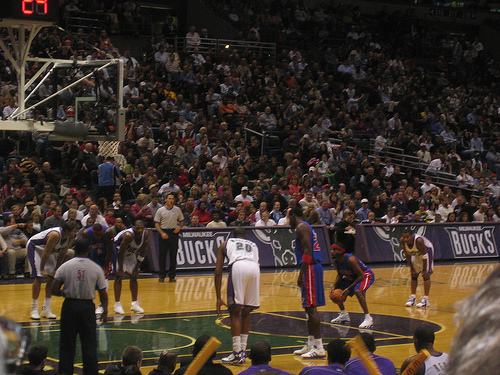 Richard “Rip” Hamilton had a long an productive NBA career and was always known as one of the best shooters in basketball,who was deadly accurate from mid-range. He was also one of the best conditioned players in the league, and his endurance was well known. You can get inside his head a little bit by reading these Richard Hamilton quotes below.

Hamilton’s ultimate goal on the basketball court was to win. Despite being a high-scoring player who could get as many shots as he wanted, he put the success of the team above his individual stats. To him, it didn’t matter how much he was scoring, as long as the team is doing well. This type of sacrifice is what can make good teams great.

Not only did Hamilton’s conditioning make him a better and more productive player, but it also hurt the opposition. Because he could stay on the basketball court for big minutes while running around and not fatiguing, the defender who was chasing him would quickly fatigue. Hamilton’s constant motion on offense also helped his teammates to get open and receive better spacing and looks at the basket.

I can run. That’s what I do. Sometimes I don’t even care if I get the ball. It’s just the fact that somebody’s chasing me.

Physical toughness can be overrated at times. What is more important is mental toughness. How can you endure and fight through even when times are tough? The athlete who is the strongest on the inside is the one who will endure. Long-term the athlete who remains dedicated, day after day, to becoming a better player will continue to make progress in their game.

I tell everybody I have inner strength. It’s not always what you have on the outside. It’s what inside.

Hamilton’s endurance was legendary throughout the NBA. He was constantly running up and down the court, and over and around screens to get open for his mid-range jumper, yet he never appeared to fatigue. That wasn’t by accident.

Hamilton worked hard to build up his endurance through distance running. In addition to all the running he did on the basketball court, Hamilton would run 3 or more miles per day on the treadmill. Basketball practice can be challenging by itself, but adding distance running can make it a real challenge.

When guys know you’re constantly moving, nobody wants to guard you. I think I’m in the best shape in the league. I tell people if I ever get tired, I know the person guarding me is exhausted.

Hamilton’s commitment to treat his body right is what made him able to get through the challenging workouts and still be recovered for practices and games. As an athlete, your health and availability is the most important thing to you.

When you are younger, you might think you are able to get away with poor nutrition, limited sleep, and lazy practice habits. Eventually, that will catch up to you and the person who is doing those things right will pass you. Even if you can get by with poor habits, you are not anywhere near maximizing your potential.

If you treat your body as an investment, both in the gym and in the kitchen, you will be a better basketball player for it in the long run. These aren’t the glorious parts of basketball training, but they can sometimes be more important.

I learned to treat my body as an investment.

Hamilton was one of the best shooting guards of the early 2000s and would eventually  become an NBA Champion with the 2004 Detroit Pistons. After a successful college career at Connecticut, he was the 7th overall pick in the 1999 NBA Draft by the Washington Wizards. He would have a long a successful career for the Wizards, Pistons, and Bulls.

Over 14 seasons, he averaged more than 17 points per game in his 921 career games. Hamilton also made it to the Eastern Conference finals 6 times, and the NBA Finals twice. He would eventually announce his retirement on February 16, 2015. These Richard Hamilton quotes show some of the reasons he was such a great player.