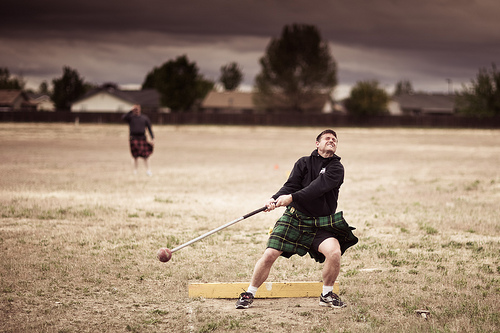 The Scottish hammer throw is a highland games heavy event that has 2 different versions and is thrown with 2 hands for distance. The event has been around in some form for centuries.

There is a light and a heavy version of the Scottish hammer throw. For men, heavy is 22 pounds, and light is 16 pounds. For women, the 16 pound version is the heavy and the light is a 12 pounder. Most highland games competitions use both weights for men and women. Throws are taken from behind a fence or cage protecting spectators.

The athlete isn’t allowed to spin or take any steps when throwing the implement. The feet are in a fixed position and the hammer is winded overhead, 3 times is common, and thrown for distance. Generally, shoes with blades are worn to help stick the feet in the ground, so the thrower doesn’t get pulled off the ground from the force of the throw. This sturdy footing can add some serious distance to the throw, as balance would be a major issue without them.

You can see video of the 22 pound heavy hammer being thrown in competition below. The throw is the world record in the event, thrown by Daniel McKim in 2014. In the video, he throws a distance of 129’11.5″.

The highland games are an exciting event for athletes and spectators. The hammer throw has been a staple of the games and is one of the events it is most commonly associated with.