What is the Definition of a Shooting Guard? 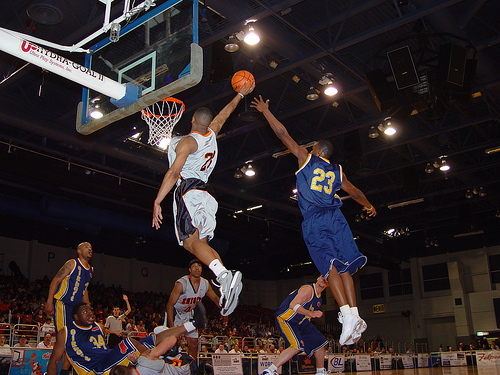 The shooting guard position has many responsibilities for a basketball team. The practical shooting guard definition isn’t necessarily that important, because it could be very different based on what the coaching staff wants and what the player is capable of. If it had to be summed up, it could be done as such:

Shooting guard – the primary perimeter scorer for a basketball team, who plays in the backcourt.

They are often the primary scoring position on a team and often get a lot of attention. They are needed to provide shooting ability for floor spacing, as well as being able to attack the basket on the dribble.

On offense, shooting guards are often asked to carry a major role. As the name implies, it would be ideal if they are a high quality shooter who can stretch the defense out to the 3-point line. They are also a secondary ballhandler who are asked to create on their own. If they can attack and finish near the basket or on a pull-up jumper, they will be seriously challenging to the defense. Hopefully, they also have good awareness and are able to make plays for other teammates with their passes.

On defense, generally they could be matched up with the opposing shooting guard, a point guard, or a small forward. This depends on their defensive skills. If they have a teammate who is a better defender, that player may be matched up with the other team’s best perimeter scorer, regardless of position. If the shooting guard is that best defender, though, they could have to matchup with any one of those positions and be responsible for shutting that player down. If running a zone defense, it is usually important to contain their area, as well as get out on shooters to contest shots.

The shooting guard position is often one of the most hyped positions in basketball because of their offensive responsibilities. Their role on the team is based on their skills as well as the team’s system.