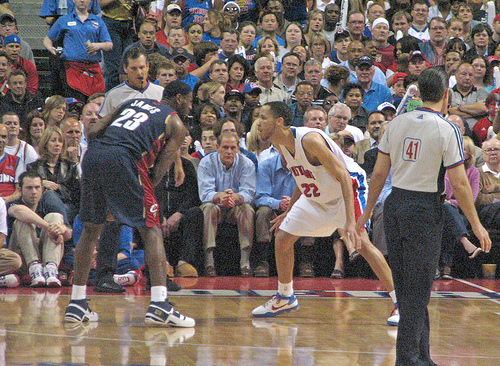 Tayshaun Prince was one of the anchors of a Pistons team that went to 6 straight Eastern Conference Finals on the back of their defense. His ability to match with the opposition’s leading scorer made him one of the best wing defenders of the early 2000s. You can read some Tayshaun Prince quotes below if you are looking for some motivation and inspiration from him.

Playing loose is crucial in basketball. Players who are worried about mistakes are the ones who are most likely to make them. Playing loose does not mean un-focused. You have to remain mentally engaged at all times and be focused on the task at hand, while remaining relaxed enough to make the shots and passes that are available. Mistakes will happen, but dwelling on them doesn’t help. Get focused on how to make the next play.

The thing about it is, we’re loose all season long and then when the playoffs come, we’re even more loose. People might not think that’s a good thing, but it’s a good thing for us. We try to stay loose. We still know the focus part and what that mental aspect is, but we like to be loose and get prepared in the way that we have to.

The offensive game can come and go – sometimes shots just aren’t falling and the team is in a drought. Teams can fight through that if they continue to give a strong effort on the defensive end of the basketball court and limit the other team. This can keep the game close, and eventually shots will start falling.

We know what our capabilities are: to have our defense get some stops and try to get started on our offensive game, which wasn’t happening for us.

Basketball is often a game of runs. One team reels have 6 straight points, then the other team gets 8 straight. It is important to keep a level head when these runs are happening, because they will swing back. The most important part is to stay mentally tough and respond to the run. This can be especially challenging on the road when the team’s crowd is intense, but staying focused will limit the run.

Whenever they took the lead or tied it up and got the crowd into the game, we made some plays to put the crowd out of it. They would make another run, and we would respond again.

Good effort is a must for every minute on the court. Even if you are playing bad, you have to keep it close for the 4th quarter, because the 4th quarter is when good teams can separate themselves from bad teams.

Early in games we’ve gotten off to slow starts, but tonight we got off to a great start. In the second quarter we kind of got lazy a little bit and they capitalized on it. But the fourth quarter has been our quarter early in the season in terms of hitting our shots and executing our plays, and that’s something that we did tonight.

When 2 great teams are playing, somebody has to lose. You can’t control whether every shot goes in or how the final plays will end up. All you can do is put yourself in the best possible position to succeed.

When they were making baskets in the fourth quarter, we knew it was going to be a grind-out game. I don’t think anybody should have lost. Both teams made plays down the stretch.

While never being known as an elite player, Prince has had a long and productive career because of his versatility. As a 6’9″ small forward with a 7’2″ wing span, he provided tough defense on superstar players from Kobe Bryant to Tracy McGrady.

Prince wasn’t highly sought after in the NBA Draft, as he was only the 23rd pick in the 2002 draft out of the University of Kentucky, but he ended up earning a starting spot at the end of his rookie season because of his defense and versatility on offense.

In his second season, he became an NBA champion, in no small part to his defense on Los Angeles Lakers legend Kobe Bryant. While his stats were never dominant, he showed his all-around skills in the 2005 season, when he averaged 14.3 points, 5.2 rebounds, 2.9 assists, 0.8 blocks, and 0.7 steals per game while starting all 82 games and helping to lead his team back to the NBA Finals.

These Tayshaun Prince quotes show the quiet leadership he brought to the basketball court, along with his stellar all-around play. And of course, he will always be remembered for his block of Reggie Miller in the 2004 playoffs. Without this incredible play, which can be seen in the video below, the Detroit Pistons might not have won the 2004 NBA Finals.