There are a variety of tight end routes, including the standard 0-9 route tree and other specialized plays. A versatile tight end will want to be able to run everything in the route tree to open themselves up to more passing play opportunities.

As football continues to evolve, some offenses are asking receiving tight ends to do more and more. ​Many require tight ends to be able to run routes from all over the field. This can be from the traditional "in-line" tight end position, in the backfield as a fullback, in the slot, or split out wide.

​A receiving tight end who can run routes from all over the field can create mismatches and stress the defense in unique ways. Below is a list of passing plays and tight end routes. 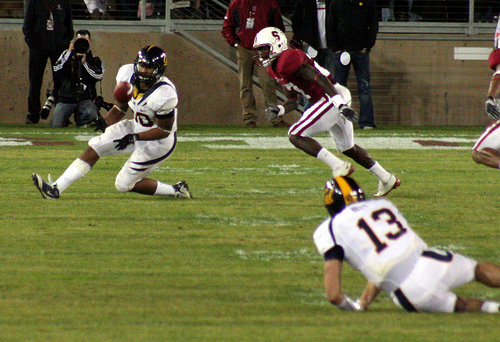 This consists of running straight down the field for a set distance, such as 5 yards, before stopping sharply and "hitching" back towards the line of scrimmage and looking for the ball.

This route is rarely run from the traditional tight end position, but could be run from the slot or split out wide.

The athlete runs straight ahead for a set distance, such as 5 or 10 yards, and then cuts sharply out towards the sideline in a straight line.

This route can be run from any position on the field. ​

​The receivers takes 2-3 steps forward before cutting sharply at a 45 degree angle towards the center of the field. This is a quick play and the pass is usually made at the start of the break.

This route is rarely run from the traditional tight end position and would most commonly be run when split out wide. ​

This consists of running a set distance, such as 10 yards, and then cutting back towards the line of scrimmage and looking for the ball.

This would most likely be done while split out or in the slot. ​

The receiver sprints straight downfield before stopping sharply and curling back towards the football.

The hook route can be run from any position. ​

This is obviously the opposite of the out route. You run straight ahead for a distance of 5 or 10 yards, before cutting sharply inside towards the middle of the field and looking for the football.

This can be run from any position on the field. ​

This might also be known as a drag route. The tight end runs a set distance and then cuts sharply towards the center of the field.

The dig or drag route can be run from any position. ​It's very common for tight ends to run this route, as it can present the quarterback with an easy target in the middle of the field.

This route consists of running forward a set distance and then cutting at a 45 degree angle toward the near sideline.

This can be a regular tight end route or ran from the slot or split out wide. ​

This is the opposite of the corner route. Instead of cutting towards the sideline, you'll cut towards the center of the field at a 45 degree angle after a set distance like 10 yards.

The post route can be run from any position on the football field. ​

This may also be known as a fly pattern or some other names. The route is as simple as running straight ahead as fast as you can and looking for the football.

The go route can be run from anywhere, but is most common when split out wide. ​

The tight end delay is another common tight end route. This is where the tight end blocks down, pretending it is a running play, for 2 seconds. The tight end then releases into the flat and looks for the football.

There are also combination routes, which combine two or more of the above routes. Some examples include the hitch-n-go, out & up, and post-corner. Tight ends are often an offense's primary target in the red zone and thus may have specific passing plays designed for when they are close to the goal line.