What does a tight end do in football? 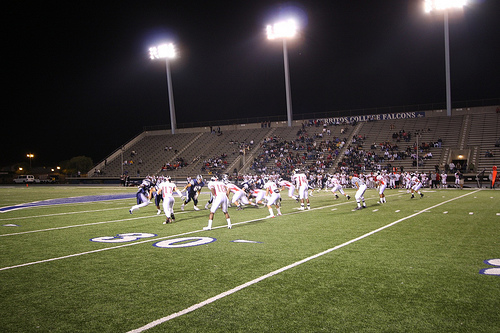 The tight end plays a crucial role for the offense in American football. They have responsibilities in the running game, passing game, and potentially on special team. But exactly what does a tight end do in football?

The tight end position is an end on the offensive team in football who usually lines up next to one of the offensive tackles, on either the left or the right side of the formation. In general terms, they usually have responsibilities of run blocking on running plays and running routes on passing plays or staying in to block in pass protection.

As offensive football continues to evolve, tight ends are being used in many different ways and may be lined up anywhere in the formation. If a tight end is a great athlete and the scheme allows it, they could motion wherever they have a good matchup with a defender.

What does a tight end do in the running game?

Tight ends often play a vital role as a blocker in the running game. They are undersized compared to offensive lineman, but are often big and strong enough to hold their own in the trenches. Because they often line up attached to the offensive line, they are frequently matched up with defensive ends and even defensive tackles when running blocking.

To make up for their lack of size in these situations, they rely on solid technique. This technique is also needed when they have to blocker faster linebackers and defensive backs at the 2nd level to make room for the running back to break free. In some offenses, tight ends are treated as essentially a 6th offensive lineman who pretty much only block, although in others they may be a primary receiving option.

Brandon Pettigrew of the Detroit Lions is one example of a player in the NFL who makes a living because of blocking skills. During his 2014 season, he played in 14 games at tight end, starting 9 of them. Despite being in a pass-heavy offense, he only recorded 10 catches for 70 yards on the entire season. He earned his playing time simply because of his blocking ability.

What does a tight end do in the passing game?

Tight ends as lead receivers is becoming more an more common at all levels of football today. Explosive athletes who are strong and built like a tight end present a conundrum for the opposing defense. What defender could possibly matchup in man coverage?

This conundrum has become a big story in the NFL today. Tight ends like Rob Gronkrowski and Jimmy Graham stress defenses in ways that few before them ever have. Both players are big, strong, and fast and a might challenge for any defender guarding them man-to-man.

The evolution of double tight end offenses has only increased the value of the position. Because they can contribute both blocking and receiving, they are more challenging for the defense to prepare for. That allows the offense to choose how to attack based on how they are defending the tight ends.

Many tight ends aren’t just used on offense, but as core special teams players. Their combination of size, speed, and blocking ability can make them very valuable. Being a blocker on field goals, PATs, and kickoff and punt return teams is pretty common. If they have good speed, they can be used in kickoff coverage also.

Tight ends are among the most versatile of positions on offense because of their skills in both blocking and receiving. This set of skills allows them to be a unique threat to the defense and can make for a difficult cover. While not the most glamorous of positions, the tight end is a crucial piece of a successful offense.