What is the Cybex Test?

Perhaps the most obscure and unheard of all the NFL Combine Drills is the Cybex Test. Event the most hardecore NFL Draft fans have probably never heard of it.  That is probably because it has no hype, they don’t get to see the results, and they have no idea what it actually is. So what is the Cybex test exactly? 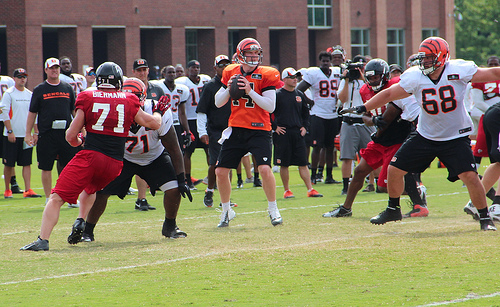 The Cybex Test isn’t the most important test prospects must go through. Although, injured and previously injured prospect’s results in the Cybex Test will get serious looks from coaches. The Cybex Test will test the flexibility and joint movement of each prospect. Each prospect will be hooked to a machine which will determine their results.

Unless you are a scout, an NFL prospect, or the most die-hard of fans, this may be your first time hearing about this. While it’s not well-known, it is still important. NFL teams will want to know the flexibility, health, and strength of a prospect’s joints. While it is unknown how big of an impact the results can have on selections, it as a key part of having a clean medical and injury examination. A poor result may be a predictor of future joint flexibility issues.

This is one of the behind-the-scenes aspects of the NFL Combine.Along with the interviews with teams, other medical and injury evaluations, and the Wonderlic Test, this is part of the draft process that fans just don’t get much access to. They probably wouldn’t want to anyway, as seeing a bunch of football players hooked up to a machine testing things they’ve never heard of probably doesn’t make for a great television experience.

You can see an example of the evaluation being performed as an isokinetic knee test in the video below. You can see the athlete has to resist the device in both directions. He is actually attempting to push the device with his quadriceps as it is coming down and pull it down with his hamstrings as it is going up.

This isn’t the only area that is measured, as any joint can be. The knee and the rotator cuff are examples of the most important areas to look at, as these have the most potential for problems in many draft prospects. It is important to have good strength, flexibility, and movement ability in these areas especially.

As you can see, this doesn’t look like the most fun evaluation to go through. The prospects sit in a large chair and are forced to resist a big machine. This is part of the unfortunate poking and prodding that NFL Draft prospects simply must go through in their evaluation.

There isn’t much specific preparation that is done, unless you happen to have one of these giant machines sitting around at your house! This isn’t like the 40 yard dash, the shuttles, or bench press test that you can do a specifc training program to prepare for. Ideally, the prospect would have naturally good joints and take care of them with proper training and nutrition, so this test would be a breeze.

While NFL draftniks and fans don’t pay much attention to this evaluation process, it is still an important part of the NFL Combine, especially for athletes with an injury history.