Despite rarely being featured on passing plays, route-running is an important skill for fullbacks. Running back and fullback routes are designed specifically to be run from out of the backfield to find mismatches or open holes in the defense.

There is not always a diverse fullback route tree as they are rarely major targets in the passing game. They are often the final option when they do run routes on passing plays and are the quarterback's dump-off choice.

The fullback is usually not a primary option on the play and are not looked to for big chunks of yard. The goal is usually to secure the football and get downfield quickly. As a dump-off option on 3rd or 4th down, it is important to find the needed first down yardage. ​ 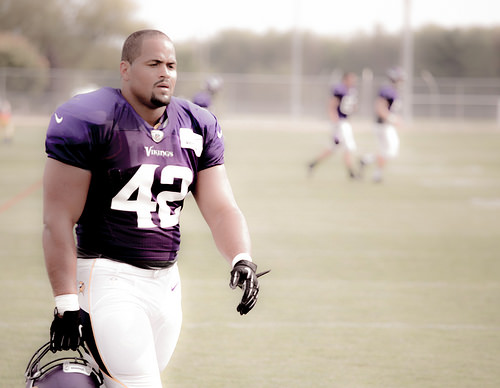 A fullback who is moved around the formation may have a route tree similar to tight ends or h backs. ​If this is the case, the number of routes will be much larger in scope than a normal fullback and would be more of a hybrid position.

Depending on the offense, moving around in the formation could mean lining up as a traditional tight end, a wing back, or even in the slot or split out wide, though those would be rare. ​

Often, a fullback is taken off of the football field in obvious passing situations and replaced with an extra wide receiver or tight end. Fullback routes are generally run in more run-heavy or balanced situations. Common times for this include early downs or short-yardage plays that may consist of play-action passes.

A flat route is a receiving fullback's bread and butter. This can be run from a play-action fake, but it doesn't have to be. The back runs towards the line of scrimmage at about a 45 degree angle and then breaks sharply towards the sideline like an out route and looks for the football.

The video below demonstrates a proper flat route. Look to catch the football cleanly and get downfield. ​

In a wheel route, the back runs toward the sideline similar to the start of a flat or swing route. The back then turns and runs down the sideline and looks for the football. The ending of this route is similar to an out-and-up. This passing play is one of the rare opportunities for a fullback to make a big play down the football field.

In the swing route, the back runs a banana-shaped route from the backfield towards the sideline. This is a great play to pick up quick yardage and to keep the defense honest.

In the video below, the swing route is compared to a toss sweep. This is because it gets the back the football in open space outside of the tackle box with potential for run after the catch yardage.

The screen play is another important passing play for running backs. It is very important as it keeps the pass rush honest by forcing them to pay attention to the fullback or running back and not just the quarterback.

A properly run screen play can be a great opportunity for a back to pick up yardage after the catch. In the screen the back fakes as though they are setting up for pass blocking before turning behind the defensive lineman and looking for the football. The back has to be patient and allow his blocks to develop. ​

Fullbacks may need to run a variety of other routes from out of the backfield. These could include a seam, post, corner, delay or sneak. They may also run combination or option routes.

A fullback who is used moved around as an h back or tight end would obviously need to know a much more complete route tree. ​If this were the case, they could be targeted on practically any pass play from all over the field.

Depending on the offense, fullbacks may not run many routes or be featured in many pass plays. In the NFL, the position is being used less frequently, but it is still a key position in many high schools and some college offensive schemes.