The hammer throw has been an official track and field event for over a century for men, but it is barely over 20 years old for women. So what is the hammer throw world record for each? 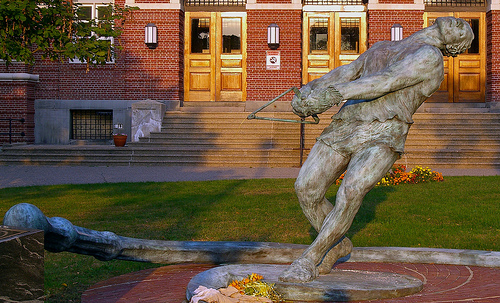 Yuriy Sedykh, who competed for the Soviet Union, set the current men's hammer throw world record at 86.74 meters, or 284'7". He made this throw on August 30, 1986 in Stuttgart, West Germany. You can see video of the throw that has held for decades below.

United States athlete Pat Ryan set the first offically ratified hammer throw world record on August 17, 1913 in New York City. Ryan threw a distance of 57.77 meters, or 189'6". It stood as the best for just more than 25 years, when Erwin Blask of Germany topped the distance. In total, the IAAF has ratified 45 records in the event.

You can see a chart of the progression of the hammer throw world record here:​

The Soviet Union had a dominant history in the hammer throw. Of the 45 world records set, 22 were set by an athlete competing for the Soviet Union. Mikhail Krivonosov and Yuriy Sedykh each set the record on 6 occasions. Anatoliy Bondarchuk set the record twice and also played a role in many others. After retiring from throwing he would go on to coach athletes like Sedykh, Sergey Litvinov, and Juri Tamm, who each broke the record at least once.

Harold "Hal" Connolly had a dominant period for the United States. Between 1956 and 1965, he broke the record six times and was personally responsible for extending it nearly 4 meters in total. Connolly was the first man to throw the hammer further than 70 meters.

The men's record is from 1986 and it has only occasionally been threatened since then. Pawel Fajdek of Poland has been the closest in the past decade. He threw 83.93 meters in 2015.

Anita Wlodarczyk of Poland holds the current women's hammer throw world record with a distance of 81.08 meters, or 266'. She made the heave in Wladyslawowo, Poland on August 1, 2015. Wlodarczyk is the only woman to throw farther than 80 meters. Video of the throw is below.

​The woman's hammer throw only officially became a track and field event in 1994. Olga Kuzenkova was the first ratified record, with a toss of 66.84 meters, or 219'3". Kuzenkova, competeing for Russia, made this throw on February 23, 1994 in Adler Russia. The record stood for more than a year, when Mihaela Melinte surpassed it. Kuzenkova and Melinte would go back and forth several times in the 1990s.

You can see the complete list of the women's hammer throw world records below:​

The 1990s were dominated by two women. Olga Kuzenkova and Mihaela Melinte would go back-and-forth with the record. A total of 14 records were ratified in the 90s - 8 by Melinte and 6 by Kuzenova. Melinte's final record was in 1999 and it held until 2005.

The first woman to exceed 70 meters was Kuzenkova, who did so in 1997. Wlodarczyk remains the only woman with a toss past 80 meters. Wlodarczyk has dominated the record book in recent years, with 5 record-breaking throws between 2009 and 2015.

With the women's record just being broken in 2015 and the 80 meter mark finally being passed, it will be exciting if the record gets furthered even more in the coming years.