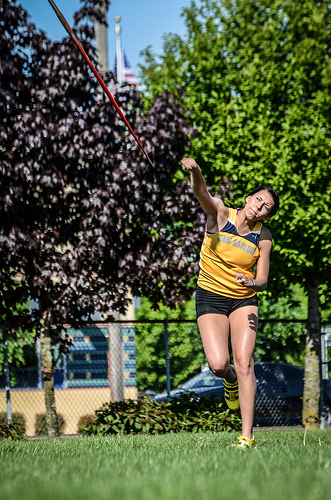 The javelin throw isn’t contested in every state at the high school level, but it is an official event in 14 different states and is competed by athletes in other states as a open event at non-school meets.

It is a very popular and competitive event at the youth level, as demonstrated by the impressive record distances that have been tossed in the past decade. Both national high school javelin records have been set in recent years, thanks to the brother-sister duo of Sam and Haley Crouser.

You can see a video of Sam Crouser competing in 2010, when he was in high school at the time. It is not his final record of 255’4″, but a previous mark of 244’2″ he tossed the month prior. Crouser would go on to compete for the University of Oregon in javelin, shot put, and discus throws. The previous best distance was held by Tommi Viskari, from New York, who tossed a mark of 241’11” back in 1988, a record that would stand for more than 20 years.

Below is video of Haley Crouser’s actual record mark of 181’2″ from 2012. She would also go onto to compete for the University of Oregon at the collegiate level, in the javelin and pentathlon. The previous record distance was by Avione Allgood, who had a mark of 176’8″ in 2011. That mark only stood for one year.

The fact that both records have fallen in recent years makes you wonder about the potential to add more distance to the current records. It’s not as simple as it sounds though, as it will take the elite combination of talent, coaching, and long-term development to top these marks.