How to be a Complete Tight End 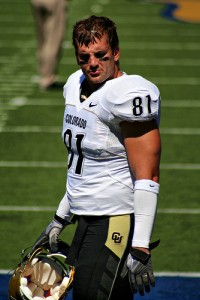 If you want to know how to be a tight end who stays on the field in all game situations, you’ll need to have skills in the running and passing aspects of a football game.

The skills and abilities of a tight end is largely dependent on their role in their team’s offenses schemes. In general, big and strong athletes are used as blockers, while fast and athletic players are used more as a receiver in the passing game.

A complete tight end can be a major x-factor for an offense. If they are skilled at blocking and receiving, they will never need to come off the football field.

To improve, you’ll need to drill on all of the skills listed below that you can control. While you can’t change height, or even weight in the short-term, you can change the other skills listed below with hard work and smart training. With proper training, you can improve your speed, strength, and vertical jump ability. Your blocking and receiving skills can also be developed in time.

Tight ends are usually among the tallest players on the football field. At the NFL level, you’ll occasionally see some shorter tight ends around 6’1″. But the vast majority of tight ends are somewhere between 6’3″ and 6’7″. This height generally gives them an advantage against most defenders in the passing game.

The build of a tight end is usually related to their role. If a tight end is used primarily as a run blocker, they may be between 260 and 270 pounds. If they are more of a receiver, they are usually between 240 and 260 pounds. You’ll want to be big enough to handle the more physical aspects of the game without hurting your overall athleticism.

Blockers can get by without elite speed as long as they are great at blocking. If you more of a receiver speed can create mismatches and separation in the passing game.

Strength is absolutely crucial for blocking, but it is also important for receiving. You’ll need to be strong enough to handle defenders in the running game. Strength also helps to beat press coverage and make contested catches.

Leaping ability can be a huge advantage, particularly in the red zone. If the athlete has the ball skills to go up and get the football in traffic by out-leaping linebackers and defensive backs, they will be a terror in jump ball situations. This can be particularly helpful if the quarterback makes an inaccurate pass, the receiver doesn’t have good separation, or if the offense is in tight spaces, such as when the field is condensed near the end zone. The combination of height and a good vertical jump can create significant mismatches when competing with defensive backs who are often less than 6 feet tall.

Run blocking is key for a tight end in pretty much any offense, but some more than others. Some offenses use them as mostly a blocker, essentially a 6th offensive lineman. If they aren’t a quality run blocker, they may be forced off the field in running situations. This is not ideal because it would help tip the defense off on what type of play will be run.

While rare, some offenses require skills as a pass protector.  If so, you must be able to help the offensive line block defensive lineman and blitzers. Although, I’m sure you’d rather be going out for a pass.

Again, pure blockers won’t do much as receivers, which means the may come off the field in obvious passing situations. If the tight end is a receiver, they’ll want to be able to run a complete route tree. Proper route-running, catching, and run after catch ability can make for a great receiving threat.

Elite receiving tight ends can be moved all around the football field in different formations. You’ll see them in the traditional tight end spot, in the backfield, the slot, or lined up as a wide receiver. If they can get open from each spot, they can be used in unlimited ways to challenge the defense. The ideal athlete is too big and strong for defensive backs and too fast for linebackers.

Tight ends can often make their biggest dent in the red zone. Their size and physicality can create mismatches against defensive backs and create touchdowns.

The ability to play on all special teams units adds tremendous value to a team. Tight ends generally fit best on kickoff return teams as well as PAT and field goal attempts, although with the right abilities they could potentially fit on any team.

To be a complete tight end, you’ll need to contribute in all aspects of the football game. This skill will make you a key player who is always on the field.