As part of the NBA Draft Combine each year, prospects who compete in the strength and agility drills are tested on their upper-body strength with the 185 pound bench press test. The best NBA Draft Combine Bench Press results since the year 2000 can be found below. 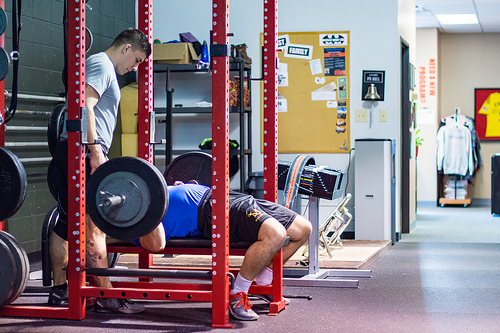 Athletes use 185 pounds and compete to see who can complete the highest number of clean repetitions without stopping. The best in recent years is 27 reps by Jason Keep, who did so prior to the 2003 NBA Draft. Below are the best NBA Draft Combine bench press results by year since the 2000 class:

Even still, it is pretty obviously that there is little correlation between being able bench press 185 pounds a bunch of times and actually being good at professional basketball, although there are some good performances by players who would go onto have success, although few would have the best performance in their given class.

These results are similar to the NFL, where the 225 pound bench press hardly predicts success. While there may be better tests that can project basketball ability, this test does give scouts the ability to see what a prospects’ upper-body strength and endurance levels look like.

The most famous case study from this test came from the results of none other than Kevin Durant. At the time, Durant was a lanky 6’9″, 19 year old who just completed his freshman season for the Texas Longhorns and was able to lift the 185 pounds on the bench ZERO times at the combine.

Durant would go on to be the 2nd overall pick in the 2007 Draft by what were then the Seattle SuperSonics. He would quickly become an elite basketball player and a superstar. While Durant has put on significant muscle mass since and is much stronger, only a small part of his improvement can be credited to increased strength.

Griffin, who performed 22 reps, went on to become the 1st overall pick in the 2009 Draft by the Los Angeles Clippers. Okafor and Williams would go on to be the 2nd selection in their respective Draft class and have long careers, while Humphries was also a lottery pick.

Keep, who performed 27 reps in 2003, went on to go undrafted that year. A 6’11”, 280 pound center out of the University of San Diego, would go on to play professionally overseas. He spent time with the Welcoat Dragons of the Philippine Basketball Association.

The second best performances, with 26, was done by Graham in 2005, Batista and Adelke in 2006, and Duncan in 2008. Batista was undrafted and would go on to play professionally in Brazil. Adelke was also undrafted and would play in the Philippine Basketball Association, like Keep. Duncan also went undrafted and played overseas. Graham was the most successful of this group and was picked 16th overall and played in the NBA from 2005 to 2011.

Looking at the best 185 pound bench press results in the recent history of the NBA combine makes an interesting case study. While many successful athletes perform well in the event, that clearly isn’t the norm. It makes you wonder if the NBA should consider finding a replacement test that can better predict success.

Results are compiled from: http://stats.nba.com/draftcombine/