What is the Definition of a Small Forward? 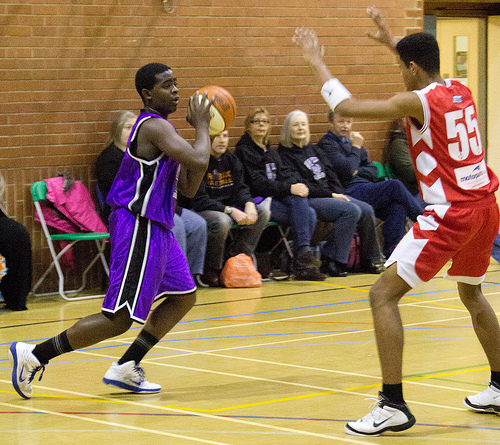 The small forward position is often one of the most versatile on the basketball court. They often have the most complete set of abilities on a team, depending on their skills, and can be the glue of both and offense and defense. You can use the following as a small forward definition.

Small Forward – a basketball position who plays primarily on the perimeter and has all-around responsibilities on both offense and defense.

Obviously, the role of a small forward comes down to what skills they have. Ideally, they will be capable running an offense, shooting, and defending. The position isn’t always a primary scorer, although there are many instances where that is the case, such as with Kevin Durant and LeBron James.

Ballhanding ability is often very important for small forwards. Players like Scottie Pippen and Grant Hill have shown the importance of this. While they didn’t play point guard, they had many of the same responsibilities in a half-court offense. Being a secondary ballhandler helps to take pressure off of the point guard, as well as provide opportunities to score and set up their teammates.

Shooting is important for small forwards, so they can provide spacing for the rest of the offense. Again, this is dependent on their skills, but they often aren’t as good at shooting as shooting guards. If they can shoot, it is a tremendous boost to their team’s offense and really challenges the defense.

Defense is very important for any position, and small forward is no exception. Often, the small forward is one of the team’s strongest defenders and might get matched up with the opposition’s best wing scorer, regardless of their position.

Strict positions are becoming less and less common and today the shooting guard and small forward positions are used interchangeably. Many offenses just have 2 wing positions on offense and matchup based on skills on defense. This makes a small forward definition difficult and frankly less important.