What does a fullback do in football? 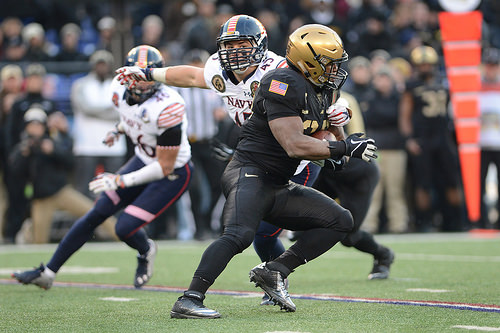 While the position has seen an overall decreased role in recent years, a fullback is still a very important part of many modern offenses. So what does a fullback do in football?

In American football, the fullback traditionally lines up in the backfield and is used as a lead blocker for the tailback on running plays. The fullback does get to touch the ball though, as they can be used as a runner themselves or catch passes from the quarterback.

The role of the fullback varies greatly from offense to offense. Many offenses, particularly in high schools and some colleges, use the fullback as a featured part of the offense and keep them very involved with carries in the running game, while also giving them plenty of opportunities to run routes and catch passes.

In the NFL, most fullbacks have a limited role, if they have one at all. In this article from ESPN, Jeffri Chadiha called fullbacks an “endangered species” and noted how few teams even carry one on the roster and those who do only have a limited role. Those who remain are mostly used as situational lead blockers.

As offenses have evolved, fullbacks have had a lessened role. A big lead blocker who gets the occasional hand-off or reception is getting harder to find. Offenses today are constantly rotating their personnel and every skill position player on the field must be able to be used as a weapon.

The increased usage of multiple tight end sets as well as 3 and 4 receiver combinations has lessened the opportunities for the position. It takes a special talent to earn a role on the football field over an offensive weapon such as an extra tight end or a slot receiver.

What does a fullback do in the running game?

Paving the way for tailbacks has long been the number one priority for fullbacks. Backs like Cory Schlesinger and Lorenzo Neal had long careers blocking for productive backs. A fullback is usually used to clear the hole for the tailback. Basically, they lead the way on a running play and clear out whatever is in the way. That thing in the way is usually a big, strong linebacker, so a fullback must be strong and athletic enough to block them.

In the NFL today, backs like Marcel Reece still get plenty of touches because of their unique size and speed combination, although this is becoming more rare. Historically, Mike Alstott of the Tampa Bay Buccaneers was a fullback who was given plenty of carries and was essentially a lead running back, capable of 100 yard games and bunches of touchdowns. You can see some highlights of Alstott’s career in the video below.

What does a fullback do in the passing game?

Many fullbacks remain passing options in the offense. Again, when they aren’t on the field as much they are less likely to be targeted by the quarterback. Still, an athletic fullback can’t be a great dump-off option in the passing game. They rarely are primary targets, but they can provide a great outlet for the quarterback. As the last option on a passing play, there goal is to take a short pass and get as much yardage as possible, preferably with a fist down.

Again, Reece of the Oakland Raiders is one of the top receiving fullbacks in the NFL today. While he has the size of a fullback, he is a tremendous athlete with terrific speed that allows him to make big plays. This is a rare ability to find today. You can see his athleticism as he takes a short pass 73 yards for a touchdown.

For the offenses that still use one, a versatile fullback with unique skills can still be very valuable and be difficult for the defense to account for. While their many priority is lead-blocking, many are more than capable of being a weapon in both the running and passing game. Again, what does a fullback do in football? Really, it is whatever the offense needs of him.