Between multiple rule changes, the world record in the javelin throw has been officially set 46 times for men and 48 times for women. You can see a list of all of them, as well as video of the current records, below. 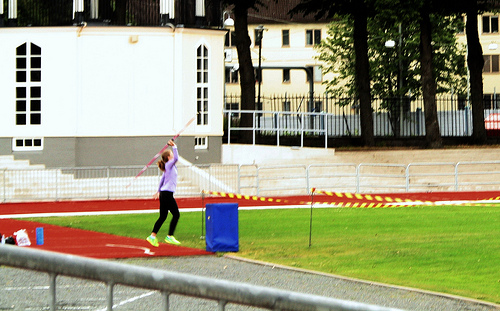 Jan Zelezny, from the Czech Republic is the current holder of the men's javelin throw world record. Zelezny set his latest record on May 25, 1996 in Jena, Germany with a mark of 98.48 meters, or 323'1". This was set with the new, post-1986 rules. You can see video of the throw below.

The actual longest javelin throw ever was by Uwe Hohn. Hohn, while competing for East Germany, threw a distance of 104.80 or an incredible 343'10". The mark was made on July 20, 1984 in East Berlin, East Germany. Rule changes in 1986, and again in 1991, established a new set of records. Because of the rule changes, Hohn maintains the world record for the old style javelin throw and is the only person to throw over 100 meters. You can see video of the throw below.

Eric Lemming of Sweden had the first officially ratified world record in the men's javelin throw when he recorded a distance of 62.32 meters, or 204'5" on September 12, 1912 in Stockholm, Sweden. The mark wasn't bested for nearly 7 years, when Jonni Myyra of Finland threw 66.10 meters.

Below is a table of all the progression of the men's world records in the javelin throw:​

Finland, led by Matti Jarvinen, has set the record 18 times. This is more than any other country. Jarvinen broke the record on 10 separate occasions by himself.

Erik Lundqvist of Sweden was the first man to throw further than 70 meters, which he did in 1928. 80 meters was first cleared in 1953 when Bud Held of the United States did so. Terje Pedersen of Norway was the first man to clear both 90 meters and 300 feet. He did so in 1964 in Norway. Uwe Hohn remains the only person to throw the javelin more than 100 meters.

Jan Zelezny's record with the current style implement has lasted since 1996 without anyone getting within 5 meters of his mark. Julius Yego of Kenya is amongst the closest with his throw of 92.72 meters in 2015.

The women's javelin throw world record with the "new" style implement is held by Barbora Spotakova of the Czech Republic. She recorded a mark of 72.28 meters, or 237'1" in Stuttgart, Germany on September 13, 2008. Below is video of the throw

Similar to the men, the women had a rule change for their implement in 1999. The world record with the old style is held by Petra Felke, who competed for East Germany. Felke threw a distance of 80.00 meters, or 262'5" in Potsdam, Germany on September 9, 1988. This is farthest throw for a female ever with any style javelin. You can see video of Felke competing below.

The first world record in the women's javelin throw was set by Bozena Sramkova, of Czechoslovakia. Sramkova recorded a distance of 25.01 meters, or 82'. The record only held for a week though, when Sramkova herself broke it. She would hold on to the record for nearly 2 years after that.

Below is a table for the progression of all the women's javelin throw world records:​

East Germany once had some dominant women in the javelin toss. Ruth Fuchs set the record 6 times and Petra Felke did so 4.

100 feet was first cleared by Guschi Hargus of Germany in 1927. It took 37 years for another 100 feet to be tacked on. Yelena Gorchakova of the Soviet Union became the first woman to pass 200 feet in 1964. Her throw also made her the first woman to pass 60 meters. Petra Felke remains the only woman to throw 80 meters in the javelin, which she did with the old style in 1988.

With the women's record having been set in 2008, it shows there is a chance for further progress. Mariya Abakumova of Russia came closest when she heaved a toss of 71.99 meters in 2011.