What is the Superweight Throw? 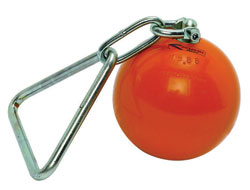 If you had no idea what a superweight throw was the first time you heard it, you are not alone. While it is no longer a common event, it was an official Olympic event twice in the early 20th century.

As the name implies, it is a super version of the weight throw. As in super heavy. For open men, a 56 pound weight is used. Women use a 35 pound weight. In masters track and field, the weight decreases for men 60 and over and women 50 and over. You can see the exact weight used for each age group on this table.

Technique
The technique for the event is the same basic technique as the hammer and weight throws. The only difference is that many people choose not to wind at all and sometimes do fewer turns. This is simply a matter of self-preservation. Attempting to wind or even do too many turns with this is very challenging, especially because most people rarely train much for it and instead do it for fun. Here is a video of the superweight being thrown:

While it is rather obscure now, it was an official event in the 1904 and 1920 Olympic games. Canadian Etienne Desmarteau was the first Olympic superweight champion, with a toss of 10.46 meters in 1904. American Pat Mcdonald won the 1920 Olympic Gold Medal with a throw of 11.265 meters. The event was also contested at American championships until 1959.

Henry Dryer was fantastic with the 56 pound weight, setting the world record several times. Although, as it is not an IAAF event, it was not considered as such. In June of 1951, Dryer threw 12.68 meters, or 41’7.5″ at the Metropolitan championships.

Bob Backus had tremendous success with the superweight. He set the record with a throw over 45 feet and won 7 consecutive American Championships, from 1953 to 1959.

Today
The superweight throw is not an event in NCAA or Olympic competitions. It is common for the event to be found in Open and Masters USATF Association Championships, either indoors or outdoors.

The event is included in the Ultraweight Pentathlon, which is popular in masters track and field. The pentathlon consists of the 35, 56, 90, 200, and 300 pound weights, all thrown for distance, and in that order.

If you don’t believe the Ultraweight Pentathlon is a real thing, I provided proof. You can see video of a competition below. Turning with the 98 pound weight isn’t an easy thing, but it can be done by some. The common technique for the 200 and 300 pound implements is swinging them between the legs a couple of times to build up leverage and then dumping it straight into the throwing sector.