How to be a Complete Fullback 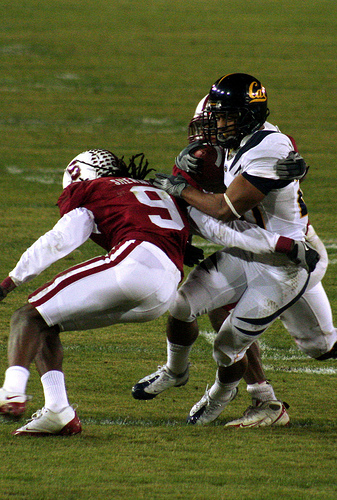 So you want to know how to be a fullback? A complete fullback is capable of helping his team in both the running and passing game. There are many skills that a fullback needs to be able to stay on the field for all plays and situations.

Fullbacks are not the size of offensive lineman, but they are usually the thickest of all skill positions, being similar in build to tight ends but not as tall. At the professional level, they are around 5’10” to 6’1″ in height and around 240-260 pounds in weight.

Fullbacks don’t need to be massive, but they need to have enough muscle and bulk to withstand blocking and running the football in heavily trafficked areas where there are often defensive lineman and linebackers in their way. Tall, athletic fullbacks with receiving skills and route-running ability can also help out by being moved around in the formation and helping out as an h back or move tight end.

Because they play such a physical role in the game, strength is important. Fullbacks do most of their work in the middle of the football field, where the biggest and strongest athletes typically are. This may mean being matched up with linebackers who have momentum running towards the line of scrimmage or helping out with big, nasty defensive lineman. Strength is important whether they are lead blocking, pass protecting, or running the football up the gut.

Speed can always help fullbacks perform better. Fullbacks are rarely used in open field situations where they need long speed, except parts of their route tree and special teams play. The speed needed is more for shot area explosion, such as getting in front of a linebacker sneaking past the first down marker when carrying the football. They also need to be quick enough to stay in front of defensive backs when they are matched up as a blocking target.

The ability to lead block is very important for fullbacks. They are responsible for leading the tailback through the hole and clearing out any defenders in the way. They are often matched up with linebackers or speedy defensive backs, making technique very important. There are specific fullback drills that can help develop lead blocking and other skills.

Pass protection is another important skill for fullbacks. If they are not running a route on a passing play, they need to help create a clean pocket. When pass blocking, they are frequently matched up with blitzing linebackers or defensive backs or they may be needed to help with a defensive lineman. Pass blocking may be done from a starting position of behind the quarterback or lined up next to him in a shotgun formation.

There just aren’t many fullbacks who are featured backs with a heavy workload at the professional level, although they may still be featured at lower levels. The ability to pick up a first down in short yardage situations is very crucial for a fullback. They aren’t looking to make a chunk play in these situations, just move the sticks.

While rarely a featured receiver, there are many fullback routes that they need to be capable of running. The more effective the back can be at his route tree and the more total routes that he can run can make him a weapon on passing plays.

Fullbacks are generally the quarterback’s last resort on passing plays and look to take short passes and tun them into first downs. Picking up short yardage first downs might not make the back flashy, but it will make the awfully valuable. Being trustworthy and productive in these situations can help the back from being replaced in obvious passing situations by a more talented pass-catcher.

Special teams are very important to a team’s success. Because fullbacks don’t always have big roles in the offense, being able to help on special teams is very helpful. With their size and athleticism combination, they are a good fit for many of the teams. The most common spot for fullbacks on special teams is as an up back who lead blocks for the returner. They can also help on punt returns, kickoff coverage, and as a blocking tight end or wing back on PAT and field goal attempts.

While the fullback position might be phased out by some NFL teams, well-rounded fullback can still help any team and many play a key role in all levels of football.